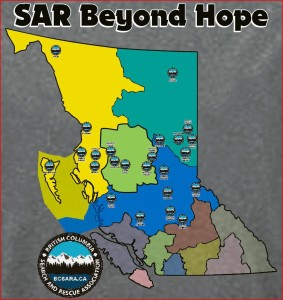 This weekend 20 of the 24 SAR teams from across the northeast and northwest met in Prince George.  In total 65 people attended, including SAR volunteers from the 20 teams, representatives from amateur radio, EMBC-Air, the Coroners office, RCMP, BCAS, the British Columbia Search and Rescue Assoc, and the 3 EMBC regional managers in the BC north.

Sessions included presentations covered a wide range of topics, including the new search management level 1 course, expenses on task, the role of the coroner, winter operations and the role of the safety officer.  There were also 4 round table discussion sessions on mutual aid, BCSARA, regional issues and successes in training, safety and recruitment.  One of the many highlights was a Skype session with world leading lost person behaviour searcher Robert Koester, who Skyped in from Virginia, and a tabletop search manager’s exercise similar to those age old favourites, chose your own adventure.   Much productive discussion happened throughout the entire weekend, with everyone sharing challenges, struggles, solutions and successes.

This weekend was made possible by EMBC and BCSARA, who worked together to cover the travel, accommodations and meals for the weekend.  Thanks goes out to the three EMBC RMs and their assistants, Andrea and Debbie, for helping organize this event, and also to the 4 BCSARA regional directors, Trent, Chris, Greg and Mike. This is the second event held in Prince George with EMBC working together with BCSARA to improve SAR delivery in the our 4 northern regions.  The last was in 2014, and prior to that, the early 1990s.  We look forward to the next one!