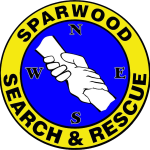 Fire at Sparwood Search and Rescue Base

In an unfortunate case of irony right before the holidays, early on December 17th it was Sparwood Search and Rescue who were in need of emergency assistance, when a fire broke out at their SAR base. By the time members arrived, large billows of smoke poured from the rear half of the building where the majority of their emergency response equipment is stored.

Many thanks go to the Sparwood Volunteer Fire Department, who were on scene within minutes of the call coming in. Rapid and decisive action by Fire Department personnel, working in wind chill conditions of below -30 degrees, contained and extinguished the fire before it could burn through to the offices and training room in the front half of the building. Their quick response also allowed SAR volunteers to move both SAR response trucks away from the building before the trucks could be damaged.

Thankfully there were no injuries, but nearly all of the equipment housed in the rear of the building was destroyed or heavily damaged by the intense heat and smoke. This includes all three of Sparwood SAR’s side-by-side ATV’s, four inflatable boats, a trailer, and a multitude of first aid and rescue equipment. In addition, the front half of the building and its contents suffered smoke damage, and the building has been left unusable for the foreseeable future. The exact cause of the fire has not been determined at this time, but it does not appear to be suspicious.

Preliminary estimates put vehicle and equipment losses at approximately $175,000, along with $100,000 in damage to their SAR hall. Insurance is expected to cover much of the losses, but it is anticipated there will be additional expenses to keep Sparwood SAR operational. As a charitable non-profit organization donations are gratefully accepted. Sparwood SAR is in the process of planning and fundraising for a number of general repairs and updates to the 1970’s vintage building, which were planned for later in 2017. Given the crippling losses and extensive damage sustained, the timetable for this work will be moved up in conjunction with the repairs. Donations can be made online by visiting http://sparwood.vr-sar.org or Sparwood SAR can be contacted by email, at sparwoodsar@gmail.com or phone at (250) 425-5913.

Fortunately both emergency response trucks, the incident command trailer and snowmobiles were undamaged, leaving Sparwood SAR still able to respond to SAR incidents. As well, nearby SAR groups have offered to provide any operational support needed. Sparwood SAR would like to thank them, along with the Sparwood Volunteer Fire Department and their neighbours at Intermountain Specialties Ltd. for their support in keeping Sparwood SAR operational while they recover from this unfortunate event.